The Internet made this dress, then my mama ruined it.  Well, kind of.   I literally saw the fabric over at Male Pattern Boldness around the same time that Gertie made McCall’s 6503 then marched on down to the apparently-not-closing-anymore H&M Fabrics/It’s a Material World to make something happen.  I mean, a rose print Ascher polished cotton fashioned into a pullover dress?  Come on.  The dress basically made itself.

So I was swanning around on my weekend back home, trying to get into a good pose with this baby on.  I got in front of the bookcase and made faces.  I stood before the mirror.  I even tried leaning on a bare wall.  I listen to myself saying it, then I say it without listening, then I hear it without saying it.*  My mum (and photographer) started making faces, too.  God, it’s contagious.

The faces gave way to outright laughter.  (My posing, it sucks.)  “You look like a maid.”  Sigh.  A maid and a housekeeper are two different people; at least she recognizes that.  The more I look at this dress, even on dear old Trixie, I have to agree that it is has a certain 1960s domestic look about it.  Maid or housewife, it works either way.  Care to see?

She could totally be caught holding a freshly shaken martini for some frazzled, behatted ad-man husband, methinks.  I don’t know if other people who sew that “sort of vintage, sort of Zooey Deschanel cutesy” look are confronted with this problem, too.  I would totally wear it but then spend oodles of time wondering if I’ve crossed the line into costume territory.  Then again, does anyone really care about how an individual chooses to dress?  For the serious.  Will I get treated differently in this dress than I would in something from J. Crew?  Ponder.

Shall we talk about the actual physical pattern now?  Let’s.  It was easy.  Full stop.  The end.  Have a nice evening, ladies and gentlemen.  Do try the veal.  No closures, no pleats, two darts.  The ruffle was the hardest part.  Specifically, the gauging of size and scale.  Once I got a handle on that, everything else seemed to come together quite nicely.  I’m not quite sure I would make this again.  Sure, it is a pretty dress.  No one is arguing otherwise.  But it is very specific.  Then again, I think that it might look just a bit less precious in a solid, neutral-ish fabric like navy.  Do you have thoughts? 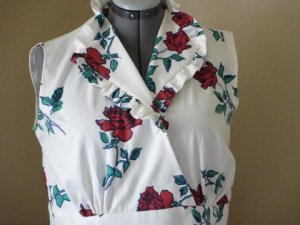 I have an upper body.  Trix doesn’t (poor baby).  So the lumpy bits are generally smoothed when on.  Also, I did not style the old girl as I was on a bus pointed southward when this was taken (you thought I was lying when I said my mum was my photographer?  Death to cameras!).  Generally, the collar is a bit more spread out when the garment is worn, but this is it.

I’m not sure what to call this.  I’ll just go with Super Rad 1960s Person-Who-Probably-Dusts Dress and call it a day.  What, too complicated?

*From the brilliant Billy Collins, in case the italics and hyperlink aren’t sacrifice enough for Ye Olde Copyright Lords.  Oddly, with the meter of the sentences before it, my mind just slipped into “Japan” and out this came.  Yes, I am insufferable.