I bought a cardigan in March.  Merino wool, long-sleeve, paid 50-ish bucks, but it retailed for $85.  (The J. Crew Tippi cardigan, if you care.)  I’m considering setting said cardigan aflame.

It’s a nice cardigan, sure, but it has not worn well.  I’m disinclined to blame the manufacturer, and not just because of my unholy Mickey Drexler fixation.  So, what’s so different from me and the intended wearer?  Well, for starters, I wore that cardigan to deff.  Up to 3x/week, while walking over a mile to the Metro, carting around a 30+lb backpack (what?  Wool doesn’t like friction?), letting my cat climb me like a tree, wading through 90% (rainless!  Effing rainless!) humidity, being late to the draw with my umbrella when the bloody rain finally came—the list goes on.  I wonder if I should have the same expectations for my clothes and shoes as someone who wears her cardigan once a week, and walks from an air-conditioned car into an air-conditioned office, and back.  Mayhap?

We’re finally getting to the point: I’ve been reading a lot of vintage style guides lately (post forthcoming, after I bone up on my contemporary style guides so that I can make sure I’m not talking out of my—God, I regret vowing to clean up my blog), and they describe a lifestyle that does not resemble mine.  Claire McCardell is really concerned about what I wear to the country club, because that’s where I’ll face some of my harshest critics.  Edith Head seems to disapprove of active husband hunting, but is totally willing to roll up her sleeves and help me do what it takes to get a man.  (Priorities, people.)  Adele Margolis thinks I’m fat.  (More on that, later.)  None of them think I carry my groceries home on the Metro, or haul enormous stacks of books to my carrel or up hundreds of stairs (inevitably flashing something to someone).   Does this lifestyle difference contribute to the expectations that I should have of my clothes?   Were things really objectively better back then?

I’ve been working on some overlapping posts lately, and can’t seem to land on the order in which they should go.  Per usual, I think I’ve overread.  I’ll just say: When reading this, perhaps think about how it relates to the evolution of our treatment of style and its cultivation (rather than an evolution of styles themselves), the increasing commercialization of fashion (The Wall Street Journal‘s Teri Agin had written a great book on this, called The End of Fashion: How Marketing Changed the Clothing Industry Forever), image and how our wardrobes affect the ways in which we’re treated, and [prickly prickly prickly] status, and the ever-stickifying interplay between art, money, and social class.  I may or may not have a Countess Luann GIF situation all queued up for the status portion.

So glad that you asked, Countess.   Some Bureau of Labor Statistics daaaaa-taaaaaa!   Don’t ever say I don’t do anything nice for you, reader.

I made you an infographic, and WordPress won’t let me embed it.  Then, I made you a Keynote presentation complete with interactive charts (it was awesome!), and even though that file extension is accepted media, it’s still a no-go.  All right, reader.  All right.  Then, I made a nifty video. . . .  You see where this is going, right?  Uphill, both ways.

The Bureau of Labor Statistics publishes its Consumer Expenditure Survey every year, now, but until the mid-1970s, it was published whenever they sort of felt like it. At one point, cash contributions and personal insurance weren’t included, and now they are.  It’s a hot mess, but I love it.  I’m using the data from 1950 to present, because the first half of the century involved two world wars and a depression, market shocks that I don’t think help our cause.

After reading Sarai Mitnick’s Coletterie piece “The Decline of Midrange Clothing” and its very, very long comments section, I had some capital-T Thoughts.  To my mind, there hasn’t been a decline in midrange, but rather a reconception of what midrange means.  I think that consumer expectations of per-garment cost have gone way down, people now expect to own more articles of clothing, and few consumers expect to pay full price for anything.  There is a reason why Ann Taylor and J. Crew so frequently do store-wide markdowns.  It’s become less about getting a deal, or even thinking you’ve gotten a deal, than it has about feeling you’ve gotten a deal.  Let’s see how my hypotheses hold up, shall we?

I’ve done some informal surveying of my older professors, and to their memories, there was literally Sears and Penneys, high-end department stores, and couture.  Sure, Marshall Field had his basement, but it was a home for in-house knockings off of the stuff from the upper floors.  Our question then becomes, are we dealing with a rise of the bottom, or a decline of the middle?  No one considered Sears and Penneys to be on the lower end of the spectrum, though.  Most middle-class families shopped there, for one reason or the next, and if you were less fortunate, you’d buy fewer things.  Also worth noting is that there weren’t really sales that often.  One professor says that he only remembers there being a 26 December get-rid-of-all-the-crap blowout (his words!) at Field’s, and that the reset of the time sticker price was sticker price.  Teri Agin, in the Marshall Field section of her book, notes that it was really in the 1980s that Field’s started running crazy cakes sales.

Let’s look at the data.  In the charts below, you’ll notice that in 1950, apparel had an 11.5% share of consumer expenditure, but now it hovers just above 4%.  Average family sizes have also changed from 3.0 (though some sources say 3.7, I’m sticking with the BLS on this one) to 2.5, and there’s been a rise in dual-income families.

Here’s the same story, but on a nifty, partially cut-off table.  Only the best for you, reader. 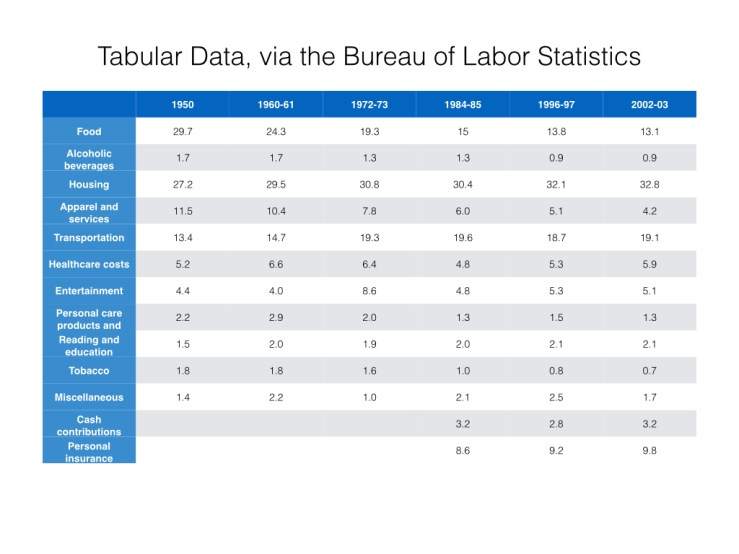 So, people expected to spend a larger share of their income on clothing.  Bee-eff-dee, Charlotte.  Get to the damn point.  Fine, reader.  What were they buying, really?  How much of it were they buying, too?  I can’t find any good data on, say, the number of trousers owned by a single household, but damn I wish I could.  I will say that it was mildly surprising to read Claire McCardell endorse a focus on quality, rather than quantity, in 1956.  I generally think of this argument as a product of the boom-boom eighties, but nope, McCardell thought it applied to America’s nascent middle-class.  In her book, McCardell advocates holding out for a $30 sweater, rather than buying some piece of lord-knows-what on sale.  $30 in 1955 is supposed to have the same purchasing power as $266.31 in today’s dollars.  For that, you could get an Eric Bompard or Brora cashmere sweater at the end-of-season sale.  You know what you (probably) couldn’t get?  A sweater from Pringle of Scotland, or a cashmere sweater from many of the marquee-name fashion houses.  Why not?  Well, I’m afraid that inflation doesn’t tell the whole story.

I’m sure you know this, but I’ll give you a refresher course.  We measure inflation, in real terms, based on the consumer price index.  Basically, inflation is the change over time in the amount of money you’d need to buy a basket of goods and services that offers a certain standard of living.  The composition of the basket has changed over the years—no iPads in the 1950s, I’m afraid—but the standard of living is supposed to smooth out.  The BLS has a nifty tool where you can isolate different segments of the CPI basket, and chart their inflation independent of the whole shebang.  I downloaded the data for apparel, then the data for the whole basket, and used my good friends Excel and Keynote to make you this fly-as-all-get-out chart.  The whole basket is in green, the apparel portion of it is in blue.  One of these things is not like the other.

So, the years 1982-1984 = 100, and are our base years, and what we’re doing is looking at the relationships between apparel and general, relative to the base years.  Our answers lie in the rates of change, basically.  It doesn’t matter how much purchasing power you have, if you’re not going to spend it.  Also, relative prices change.  I remember reading that compared to Americans of 1895, contemporary consumers are 60 times richer in mirrors, but 10% poorer in fine silverware, partially because demand for the latter has gone down precipitously and prices have gone up.*  (Not necessarily in that order.)  It seems we’re richer in clothes, when looking at the graph.  You’d only need 25% more money to buy the 1982-84 apparel portion of the basket, versus needing over 120% more money to buy the whole basket.  Ruh-roh.  Here’s the evolving price of the dollar, for the curious.  Read it as one USD in [blank] would give you the same purchasing power of [blank] in contemporary dollars.

One last piece of statistical data before I go grab some pancakes.  I was reading the Agin book last night, and she mentions that in 1994, a quilted Chanel bag was priced at $960.  Assuming she’s writing about a small, classic flap bag (the one with the interlocked-C lock and the metal-and-leather chain), that same bag retails for $4200.  $4700 after this year’s mandatory Chanel price increase.  Reader, America is not projected to have 10% inflation this year, and neither is the Eurozone.  There’s something afoot, but we’ll talk more about it when we get to the status piece of the puzzle.

Why the protracted lecture?  I just wanted to toss this stuff out there before doing my alleged “review” of the McCardell, Head, and Margolis texts, and comparing them to contemporary style guides, because, for me, the econ side of the equation was/is pretty important going in.

I’m going to come back and a) catch up on comment replies and b) insert some hyperlinks for the labyrinthine BLS website after I’ve had some breakfast.  Oh, and I might even proofread.

*Oh, I read that statistic in Charles Kenny’s Why Global Development Is Succeeding.
** I should probably thank David Sedaris’s Hugh for the title of this blog post.