I can’t make any decisions.  From the title of this blog to the use of my fabrics, I just waffle away.  (Seriously, though.  The Stitch, really?  Doesn’t that sound far too much like I’m positioning myself as an authority rather than a bungler?  Ripped Stitches is more like it.)  I have tons of posts in draft mode, but I haven’t finished any of the projects to which they’re attached.  Not to mention, I’ve suddenly lost all ability to insert an invisible zipper, which is usually my favorite part.  I’ve decided to just go with it.  Care for an example?

I have two Simplicity 2215s dresses that are almost done.  One needs a zipper, and both need buttons. 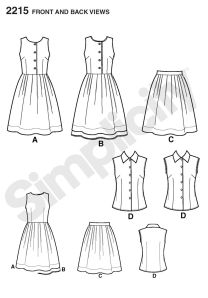 The first is with a black-and-white printed Marc Jacobs cotton.  It’s from Fabric Mart, so I’m not thoroughly invested in its future.  The question is about button size.  How much is too much?  The pattern calls for four 1/2″ buttons, though that strikes me as odd on a bodice that long.  Six, maybe, or four 3/4″ buttons.  Then again, I can’t quite gauge scale.

See?  It’s a nice, petite print, but I’m not quite sure of how the (black, average-looking) buttons will work out.

I also made it up in this pink ikat that I love.  I am not married to button size on this one.  Originally, I was planning on self-covered buttons, but that might be a bit much.  Maybe solid, hot pink fabric-covered buttons?  What about the exciting world of brown?  Leather or wood or metal?

I just can’t decide, so these projects live in limbo with the dress that refuses to just take a darn zipper, the one for which I haven’t topstitched the arm facings (I can’t decide whether or not I want sleeves), and the one that just sits there all cut out and basted with a missing sleeve and an off-the-market fabric.  Is there a sewing muse?  A sewing god in some sort of obscure mythology?  Whose candle do I have light, is what I’m asking.

Line drawings from Simplicity, buttons from M&J Trim, awful Photoshopping and even more awful fabric photography by yours truly.  Fin.

Charlotte’s an amateur, er, intermediate sewer whose stash growth far outpaces her output. She writes over at Seam Ripped, a blog that pretends to be about transitioning from stashing to sewing. Actually, it is mostly about cats and books. Also, she generally manages to not talk about herself in the third person. Generally. View all posts by Charlotte

Looking for something particular? Try a search.

Ripped seams, scrapped wadders, and all the gory details